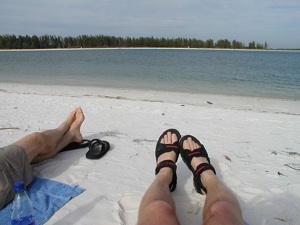 One of my subscribers, who used to work for IBM, recently asked if I’d meet him for coffee because he was thinking about buying a franchise and he wanted to tell me about his franchise broker.

Since he’s practically my neighbor in Frisco, Texas, it was easy to get together, but he probably didn’t expect me to tell him what I told him!

After he lost his job, where he made a neat six figures, he posted his resume on a number of online career boards and one day he got a call from a franchise broker from New York. Brokers scan those listings, looking for out-of-work people who might be interested in buying a franchise. (For me, that’s a tough way to make a living, but to each his own, especially in a recession. I prefer listening to my subscribers’ stories and responding with stories of my own.)

Why not to buy a franchise

My subscriber explained to me, “The franchise broker told me that jobs are impossible to find in my industry, and he suggested that I buy a franchise.”

I could spend the next several weeks writing the lessons that emanate just from that one stupid statement! (I’ll also refrain from telling you the name of the franchise broker, for fear that more reputable brokers might rip out his voice box).

Surely no one is dumb enough to believe that if you can’t find a job your solution is to buy a franchise! (Reminds me of Philosophy 101. Because the Marlboro Man was cool we should all start smoking?).

I couldn’t wait to ask my subscriber, “Do you want to buy a franchise?”

He said, “I like having a job.” In fact, he recently got a job, though it pays considerably less than his six-figures with IBM. “I’m more of a guy who likes to hang out on the beach with my family,” he told me. “We bought some land in Mexico some years ago thinking that we’ll eventually move there and live the good life on the cheap.”

To which I replied, “In spite of your franchise broker, you don’t sound to me like a guy who should buy a franchise.”

And he said, “But the franchise broker thinks that’s my answer!”

Where are 6,000 franchise concepts?

At this point I wanted to rip out the voice box of that franchise broker! Another half-dozen lessons emanate from that nearly criminal statement! (I really dislike people who give franchising a bad name and who create win-lose situations whereby they (the franchise broker in this case) win a commission, and the franchisee loses all the way around).

Six thousand franchise opportunities? I’d call the International Franchise Association and ask them where all those opportunities are, but it would be a waste of time. They don’t exist. Six hundred that are worth buying? Well, maybe, but not for the reason the broker offered. It’s nonsense.

Here are 3 you should buy!

So my subscriber continued, “The bottom line from the broker was that I should look at three companies.” He told me the names, two of which I recognized, though he wasn’t familiar with any of the three. He added, “I reluctantly agreed to be introduced to those companies.”

Reluctantly because he wasn’t really interested! But folks in Frisco, Texas (with some exceptions) are kind, gentle, and cooperative.

“And what happened?” I asked, in my not-so-gentle voice.

“What did you think about the salesman trashing the other franchise company?”

“I didn’t think he needed to do that,” said my kind and gentle subscriber. “I thought it was odd. But he told me that since he couldn’t sell me a franchise he would help me stay away from a franchise that has a horrible reputation.”

“Well,” I offered, “he wasn’t totally lying. That business has a rocky reputation, though some franchisees have been happy with it. . . . Did the other two companies call you?”

“No!” said the subscriber, somewhat shocked.

“Not a surprise,” I said. “I used to generate leads for franchise companies and not even half of the companies ever followed up on the leads. It’s just one of those odd things about franchise sales people.”

One concept the broker didn’t know

Eventually my subscriber told the broker that he wasn’t really interested in any of the three concepts, and he elaborated that if he’s going to buy a franchise it needs to be something that he can work from home. He then told the broker about a home-based franchise that interested him.

“But he told me that he never heard of that business and that start ups are too risky. He wouldn’t recommend that I buy it,” my subscriber explained.

“Of course not,” I said. “He’s not going to recommend that you buy anything that he doesn’t represent. He wants his commission. After all, he spent hours on that career board culling through all those resumes to find you!”

“Exactly,” said my subscriber, no longer as kind and gentle. “Which leads me to wonder why anyone would work with a broker? If they’re only going to tell you to buy businesses that will pay them a commission, how does that best serve me?”

I laughed. “Yea, with 600 companies supposedly out there that are worthy of your investment, it would be difficult for a broker to represent all of them!”

My subscriber had already demonstrated one way to shorten that list. He said he wanted to buy a home-based business. That eliminated at least 80 to 90 percent of the opportunities, leaving him with no more than 120 (assuming there were 600 to begin with!)

Why local brokers may be to your advantage

Major brokers typically represent a hundred-plus concepts, but they may not represent competitive concepts, and they may not represent the concept you really want to buy. For example, if it’s a regional concept, available only in your area, the broker may not even know about the concept, let alone qualify for a commission. And if you’re working with a broker that’s many states away from where you live and want to work, you’re at an even greater disadvantage (which is why I prefer my subscribers work with local brokers).

However, keep in mind that some good franchise concepts refuse to work with brokers, so you’ll have to contact those companies directly.

But in the case of my subscriber, the real story is that he doesn’t want to buy a franchise. He wants a job! A better job than the one he has now. He may have expected me to encourage him to buy a franchise, but in good conscience I couldn’t do so. As I’ve said to my franchise audiences for 30 years, “Franchising is not for everyone.” It’s definitely not an answer for someone who’d rather have a job, even if he can’t find a job.

As we left our meeting, I said to my prospect, “Keep looking for that better job. IBM will hire again! And don’t listen to the broker when he tells you that it’s impossible to find a job in your industry. He’s already proven that he doesn’t know much about franchising, or he’s just not willing to share the truth about franchising. No reason to believe he’d tell you the truth about your industry, if he even knows anything about it.”