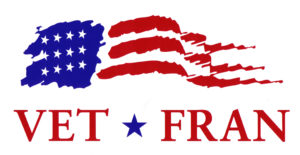 The Veterans Transition Franchise Initiative (VetFran) has helped more than 6,500 veterans become franchise owners since 2011, and more than 230,000 veterans and military spouses find jobs in the franchise community.

If you are a veteran of the U.S. military, more than 650 franchise companies want you!

VETERANS OWN 1 IN 7 FRANCHISES IN THE USA

Of all the franchise businesses in the U.S., veterans own approximately 66,000 of them, a number that’s based on census data and business owner survey information. Several magazine articles appearing in Forbes, Franchise Times, and Franchise Business Review (Top Franchises for Veterans) report that 1 in 7 American franchises belong to veterans.

Every franchisor looks for veterans because of their skill sets, their commitment to work, their ability to follow orders (or what franchisors call a system), and their integrity.

The fastest way to succeed as a franchisee is to follow the franchisor’s system, and veterans instinctively appreciate the value of doing so.

To all of America’s veterans – first and foremost, thank you for your service. And if you are inclined to own and operate a franchise, or go to work in a franchise business, there are at least 650 franchise companies that want you!

Get more details at Vetfran.com.