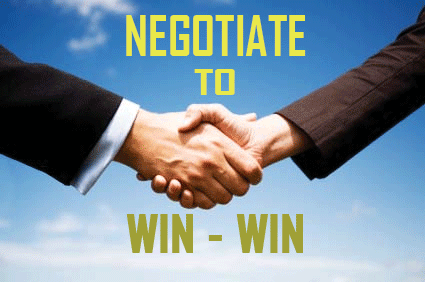 Yes, franchisors will negotiate when you buy a franchise

A common misconception about buying a franchise is that franchisors will not negotiate with prospective franchisees. But the truth is, franchisors negotiate!

For many years, the Franchise Disclosure Document (FDD) was called the Uniform Franchise Offering Circular (UFOC), and the word “uniform” was often used to discourage negotiations at the time of buying a franchise.

When a prospective franchisee tried to negotiate, a franchisor would reply: “It’s a uniform offering. That means everyone gets the same deal. You’ll get the same terms as other franchisees. We don’t negotiate. ”

I don’t know why the UFOC became the FDD, but there must have been a good reason. However, the name change destroyed the franchisor’s easy out when franchise buyers asked to negotiate.

The “uniform” disclosure offered every franchise buyer the same upfront fee, the same royalty fee, the same start-up benefits, including training and support at no extra cost, for example, but modifications still occurred, and they occur today.

Franchisors negotiate, especially if it’s a “win-win” situation. And why not?

But it is dangerous, especially for the franchisor.

Just imagine that you and I bought the same franchise at the same time. We then met in the franchisor’s initial training session, where we became good friends. When we had free time, we huddled up to figure out our strategies. Even though our respective franchises would be miles apart, we were part of the same brand, so our marketing plans looked very much alike. We bounced ideas off each other and had a good time doing so.

Then one morning about a week into the training, we were alone at breakfast and we were re-evaluating our decision to buy a franchise. Generally, we were happy with the training, the corporate team, and the opportunities ahead.

You then said something like this: “Based on everything I see so far, I don’t mind paying a 7% royalty on my sales. How about you?”

Should I say that I got a better deal?

I had negotiated a 5.5% royalty for the first 24 months. I was able to do that because I brought some existing accounts with me into the franchise, and so the franchisor would immediately begin collecting a good chunk of money from me starting my first month in business.

Usually a franchisor has at least a 120 day waiting period before the royalties amount to much from any one franchisee. When franchisees are just getting started, and depending on the type of business, it takes time to ramp up sales. So franchisors know several months may go by before the franchisee’s royalties amount to much. Franchisors collect the royalty starting the first month, especially if they have a minimum royalty requirement, but it doesn’t add up to much in most situations.

Suddenly, I’m faced with a moral decision. I could just tell you, “Yes,” and let it go. Or I could reveal my better deal with an explanation.

Would you use my better deal to your advantage?

But telling the truth could upset you, and you might begin to think differently about the franchisor. Maybe not immediately, but if things aren’t working out for you, you may use that information down the road.

You might tell other franchisees about my deal, including others who might have been able to negotiate a better deal had they known the franchisor would negotiate.

The franchisor, by the way, never asked me to keep my deal secret, but when we worked out the terms it was clear that they were making an exception for me, and it would not be beneficial to them if other franchisees knew about our deal.

Even so, our deal was beneficial enough to them to reduce my royalty fee for two years.

Franchisors take a risk when they negotiate fees, territory, or other benefits, but in more than 35 years of working with franchisors, I’ve never known one that did not negotiate. If it makes good business sense, franchisors negotiate, and they should.

There are brands that won’t negotiate because it’s not to their advantage. For example, if you plan to buy a McDonald’s franchise, or Taco Bell, or Subway, your opportunities to negotiate will be very slim. After all, major brands are rarely in a situation where they need to negotiate.

There may be exceptions for a franchisee who has operated a similar or competitive business for many years. After all, experienced operators can build up sales faster than a new franchisee with no experience or contacts.

If you’ve owned multiple franchise units in the past, and you’re a proven operator, you may be more desirable than an inexperienced franchisee. In fact, given your success record, the franchisor may be wondering, “What’s it going to take to get this prospect to sign our franchise agreement?”

Go ahead; tell them what it’s going to take! But don’t get your hopes up, especially if it’s a major brand, because these exceptions are not regular occurrences.

With new franchise companies – and many of them enter the marketplace every year — the best time to negotiate is when you’re the first, or among the first, to buy a franchise. In this case, the franchisor may need you more than you need the franchisor.

Building a franchise network is all the more difficult when you don’t have any franchisees. Until the FDD shows a list of franchisees that prospects can call as part of the due diligence process, franchise buyers hesitate to take a chance on something new.

But if you’re willing to be first, or among the first, you may be able to negotiate a very favorable deal, including a lower upfront fee, lower (or no) royalty fee for a period of time, additional territory, and other benefits.

It’s not unusual for new franchisors to announce in their FDD that they are offering reduced fees or other benefits to the first ten franchisees.

Show the franchisor a good reason

Negotiations occur every day at some level of franchise sales, but keep in mind that when buying a franchise, negotiations do not occur without justifications. And even then, some terms will not be negotiated because the franchisor wants to keep the terms uniform among the franchisees. This saves lots of explanations and also reduces the likelihood of lawsuits.

If you can demonstrate value for the franchisor, you may be able to negotiate. Say you’re converting your 10-year established business to a franchise brand and you’ll bring 1,000 new customers to the franchisor. That’s worth something! Or let’s say you’re the first franchisee to join the network. You may be able to ask for delayed royalties for six months, or additional training and coaching at no cost.

Bottom line: Don’t let the idea that franchisors do not negotiate keep you from inquiring about buying a franchise. In spite of federal and state laws, and a restrictive FDD, franchisors have the capacity to be creative, especially when they see a prospect that they want to claim as a franchisee.


Categorised in: Blog Articles, Buy a Franchise, Franchise due diligence, Franchise negotiation, Questions to ask to buy a franchise