“Do They Think Franchisees Are Robots?” Yep, Isabel, Again 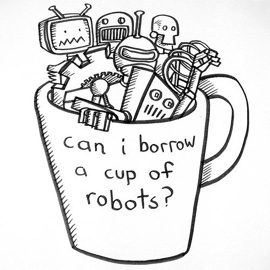 I guess she hadn’t ever read a Franchise Disclosure Document until this week. And she wasn’t happy!

I’m talking about Isabel. Crazy Isabel! She’s back. (Previous Isabel articles are posted at the end of this blog).

The franchisor spelled it all out

“When you read the Franchise Disclosure Document, everything is in the franchisor’s favor!” she screamed, like she had just come through a nightmare.

And the problem is?

I said nothing for a moment, giving the air time to clear.

Finally, I dared to speak.

“Do you really want it to end, Isabel?

No time to be sympathetic

I knew she expected me to be sympathetic — or at least hoped so. But come on. Really? We’re talking about franchising.

This is serious stuff.

No one is forced to become a franchisee

“I said, ‘do you really want it to end?'” and I gave her no time to answer because, frankly, I didn’t care and I needed to make a point.

“Look, it’s called a franchise. It means: license. It means someone is going to license you to operate their business in a specific manner for a specific period of time, and possibly in a specific location. They’re going to license you the opportunity to use their brand, their trade dress, their marketing plan — you’re going to represent them, Isabel. And they have the right to tell you what you will and won’t do. Because they grant the license!”

You can always do it on your own

I cut her off.

This isn’t about your right to make decisions

“Meanwhile, they don’t want to license people who are going to make decisions and take the chance those decisions will turn into costly mistakes . . . and then into failures. They don’t want failures . . . they want successes, and it’s a huge challenge for them to find people who will be successful — even when they have spelled it all out for them!”

I paused even though I didn’t want to. But I remembered that Isabel is the client and while I can get as excited as she can get about these issues, I didn’t want her to think that I was a raving nutcase, simply spewing franchisor gunk.

Why do you want to make decisions?

“Do I get to make any decisions as a franchisee?” she asked.

“No, of course not. My goal is to be a successful franchisee, operating a business that I find — in your words — both satisfying and profitable.”

Better that the franchisor make all the decisions for you

“Very good,” I said. “You’re a terrific student. So why are you hung up on making decisions? In fact, why aren’t you looking for the franchisor to make all the important decisions for you, assuring you of your success?”

“Because I don’t want to be a robot. I want to participate in the business. I want to make it mine,” she said, starting to get excited again.

“I don’t want you to be a robot, either. Neither does the franchisor. But Isabel, let’s just get down to the basics. You don’t know how to build a satisfying and profitable business — at least not the type of business that you’re looking for. Is that fair to say?”

The franchisor invents the wheel

“Very good. . . . Meanwhile, there’s a franchisor who has figured it out, or at least claims to have figured it out. They’ve already built the business. They’ve made mistakes. They’ve lost money. They’ve invented the wheel. They’ve recruited and trained franchisees, some of whom are doing very well. And they’re explaining most of this to you in the Franchise Disclosure Document. So far so good?”

The franchisee spins the wheel

“And I bet they love their business. In fact, they love it so much that they want to protect it. And that’s why they use the Franchise Disclosure Document. They don’t want to trash it. They don’t want start-ups that quickly fizzle into failures. They want franchisees who will succeed. And they’ve learned that they need to spell it out, they need to teach and train and support the franchisees and show them what to do, when to do it, who to do it with, etc., in order for the franchisees to succeed.”

“I get it,” she said. “And they list it all in the Franchise Disclosure Document. But it seems so oppressive.”

“Well, it may be. But if it’s also a way to be successful. You may be able to live with oppression, if it’s really oppressive, and I don’t know that it is. The most successful franchisees I know never tell me that they feel oppressed! But they do feel grateful that the franchisor figured it all out for them, made and paid for the mistakes in advance of them, and gave them a Cheat Sheet, so to speak, that helped them make good decisions — the decisions that eventually led to their success and satisfaction.”

Suddenly it was quiet again. Isabel was letting it sink in.

“Are all Franchise Disclosure Documents like this?” she asked. “Do they all spell out what the franchisee must do?”

“No, only the good ones,” I told her. And I was dead serious.

“I would not encourage you to buy a franchise if they only gave you part of the formula for success. . . . And again, Iz, I’ve got to go back to this point: Maybe it’s not for you. Maybe you don’t really want to be a franchisee as much as you want to be a business owner who makes her own decisions, win or lose. That’s what you need to think about. . . .

Reasons why you should buy a franchise

“I thought we had covered that ground — the fact that a franchisor has the absolute right to decide what franchisees will do, when and with whom, and all the rest of it . . . and the franchisee’s job is to listen and respond and follow — never to re-invent the wheel. . . . If you think you can’t do that, or don’t want to do that, if you think that turns you into a robot, if it’s oppressive, for cry-in’ out loud, then do not buy a franchise.”

“I understand,” she said. “I do want to be a franchisee. I realize I don’t have the answers and I don’t have enough money to make costly mistakes.”

Only the franchisor’s reality counts

“But you may not be willing to trade off your reality for the franchisor’s reality. And Isabel,” I concluded, “the franchisor’s reality is the only reality that counts in franchising. And it’s all spelled out in the Franchise Disclosure Document. . . . Think about it . . . and we’ll talk again . . . if you’re still willing.”